Expansion to an international waterway

River landscape of the Oder in danger

In 2015, Germany and Poland signed a government agreement to expand the Oder border river, ostensibly for flood protection by means of deep icebreakers and for inland shipping. The port in Schwedt is to be made accessible for coasters and the ports in Szczecin and Świnoujście are to be expanded for ocean-going vessels. On the entire Oder, the governments of Poland and the Czech Republic are even planning a chain of barrages and the construction of the Danube-Oder-Elbe Canal to connect the Baltic Sea and the Black Sea for large inland vessels. As the so-called E-30 waterway, the Oder is to become an international waterway in the core network of the Trans-European Transport Networks (TEN-T). It would be designed for ships with a length of more than 80 meters. To accommodate them, the channeled Oder must be at least 2.5 meters deep. The construction would destroy this great natural river in the middle of Europe. In the face of this, great efforts are required from everyone so that the mistakes made in the Rhine-Main-Danube Canal are not repeated.

Planned Locks
Habitats are at stake

In order for cargo ships to be able to navigate the waters of the Oder, they would have to be straightened, deepened, dammed and dredged in many environmentally sensitive parts of the river landscape. The construction measures could dry out the floodplain, directly affect Natura 2000 sites, threaten species and make rare habitats disappear. The planned expansion of the Border Oder and the construction of the E30 waterway would not only undermine ecosystem services such as water retention, flood protection and carbon storage. Rather, it would increase the risk of flooding in the bottlenecks of the Oder. In addition, enormous potential for nature tourism and natural farming practices would be lost.

Experts have found that a feasibility study for the regulation of the German-Polish Border Oder from 2014 failed to take crucial factors into account. These include the uncontrolled erosion of the river bed, the lowering of the water table, the increased risk of flooding and the effects of climate change. The environmental associations also warn of serious negative impacts on the ecological status of important protected areas for the entire Oder river and the planned Danube-Oder-Elbe canal. They also point out that a lack of stakeholder and public consultation would likely violate national and international law. The main results are listed below. 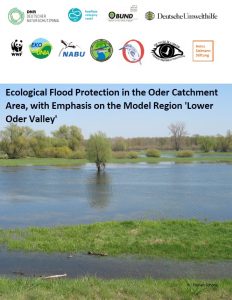